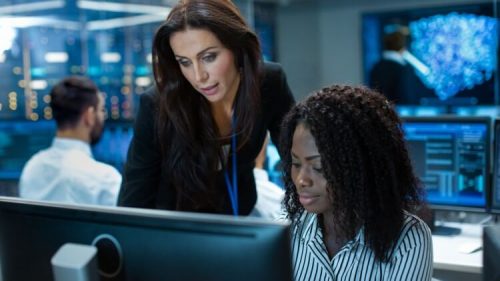 Blockchain is one of the biggest technological developments of the past 10 years. Because it is a key element of online investing, cryptocurrency and cyber security, familiarity with blockchain is becoming a prerequisite for those pursuing advanced careers in IT security. Here we’ll take a closer look at what blockchain is, why it raises so many security issues and how those issues can be addressed by qualified IT professionals.

For those considering a career in cyber security, advanced education can be invaluable. A Master of Science in Cyber Security can provide immersion in blockchain security issues.

The Growing Importance of Blockchain

Perhaps the best place to begin is to answer the question “what is blockchain?” Simply put, blockchain represents pieces of digital information (“blocks”) that are stored in a public database (the “chain”) and linked using cryptography. One reason blockchain exists is to prevent “double spending.” This means blockchain makes it almost impossible to use the same currency on two separate transactions, though cyber criminals tried to find ways around this.

New blocks may be added to a blockchain any time a new transaction takes place. When the transaction is validated, it is given its identifying code that is unique from all other blocks in the chain.

How Blockchain Is Used

Blockchain was developed for use in the trading of cryptocurrencies such as bitcoin. Each bitcoin or other cryptocurrency transaction is given a blockchain record that is available to the public. In addition, individual users may sync their computers with a particular blockchain, receiving updates as new transactions take place.

Blockchain allows for transactional data to be quickly and easily processed, which accounts for its increased popularity in various online investing markets. Additionally, it offers some important security precautions. It is very difficult for any block within a blockchain to be altered or modified, which helps prevent fraud. Additionally, identifying codes built into each block allow for transactional data to be easily traced.

Still, it’s because blockchain is so popular (and because it’s typically used in transactional settings) that it has become an alluring target for hackers and other cyber criminals. With this increase in popularity, a number of blockchain security issues have arisen.

Here are five of the most pressing security issues related to blockchain technology.

While blockchain has been touted as virtually “unhackable,” it’s important to remember that most blockchain transactions have endpoints that are far less secure. For example, the result of bitcoin trading or investment may be a large sum of bitcoin being deposited into a “hot wallet,” or virtual savings account. These wallet accounts may not be as hacker-proof as the actual blocks within the blockchain.

To facilitate blockchain transactions, several third-party vendors may be enlisted. Some examples include payment processors, smart contracts and blockchain payment platforms. These third-party blockchain vendors often have comparatively weak security on their own apps and websites, which can leave the door open to hacking.

Today’s blockchains are the largest ever built, and as the technology continues to gain in popularity, blockchains are only going to get bigger. This has caused some experts to be wary, simply because these large-scale blockchains are untested. Common concerns center around the issue that as the blockchain ecosystem grows, additional vulnerabilities may be discovered and exploited, or that the tech infrastructure that supports blockchain will become more prone to simple mistakes.

Still another blockchain security issue is the absence of clear regulatory standards. Since there’s little standardization in the blockchain world, developers have a challenging time benefitting from the mistakes of others.

A final issue to address: While blockchain has historically been used for cryptocurrency trades, it’s increasingly being used in other fields. The problem is the coding used in non-cryptocurrency applications tends to be untested and highly experimental, meaning that hackers may be able to find and exploit vulnerabilities.

While blockchain poses potential security risks, there is much that cyber security professionals can do to mitigate these threats. IT professionals who have carefully developed analytical and technical skills will be well positioned to deploy blockchain as safely as possible.

Pursuing a Career in Cyber Security

Developing robust blockchain security strategies requires the guidance and expertise of trained cyber security professionals. One way to pursue a successful career in this field, and ultimately add value to an organization, is to develop core competencies in blockchain implementation and encryption.

The University of North Dakota’s Master of Science in Cyber Security program offers a Data Security track that focuses on these issues, including courses such as Applied Cryptography and Cloud Computing.

Learn more about the program and how it can help you embark on a new career in the desirable field of cyber security.

CNBC, Everything You Need to Know About the Blockchain

Statista, Size of the Blockchain Technology Market Worldwide from 2018 to 2025