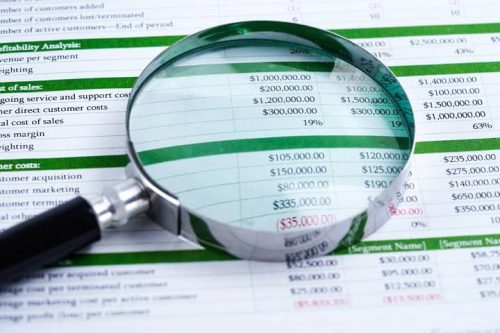 On popular TV shows, forensic scientists collect and analyze clues at a crime scene. Even the tiniest pieces of evidence – a hair, a minuscule thread, a microscopic trace of DNA – can be the key to catching a perpetrator.

In the financial world, forensic accountants perform a similar function. Following the trail of spreadsheets, banking information, tax filings and other data, they discover and investigate potential fiscal wrongdoing in criminal and civil cases.

“We’re like the accounting pathologists,” Dawn Brolin, CEO of the Connecticut-based firm Powerful Accounting, told Marketplace.org. “We come in and we will tell the story of how the crime happened.”

A lot of their sleuthing involves high-level white-collar crimes or instances of corporate oversight, but forensic accountants are also active in cases involving drug traffickers, mobsters, terrorists or high-profile divorces.

And though many practitioners enjoy the element of detective work, they also need extensive knowledge of general accounting terminology as well as analytical skills and an understanding of legal and regulatory processes. Earning a master’s in accountancy online can provide the foundation for a career in fiscal crime-fighting or corporate accountability.

The word “forensic” refers to applying scientific methods and techniques to crime investigation. It also means that the findings must meet strict standards for use in court.

The investigation side is about determining whether a crime has taken place and may involve inquiries into matters such as identity theft, employee theft from a company, insurance fraud or securities fraud. As part of their investigative role, forensic accountants might write reports or recommend actions that a company or individual could take to minimize future losses.

Strategic Finance magazine adds a third discipline: business valuations, whether adversarial or cooperative. The article goes on to enumerate six marks of a good forensic accountant:

Forensic accountants were instrumental in the prosecution of Bernie Madoff (whose investment Ponzi scheme included backdated fake stock trades that he recorded on Post-It notes) and the investigation of Enron, an energy-trading corporation that perpetrated one of the biggest accounting frauds in history.

But perhaps the classic example of successful forensic accounting evidence gathering is the Al Capone case.

“Although the term may not have been used before the 1940s, a strong argument can be made that the first high-profile forensic accountant was Frank J. Wilson, the man who spearheaded the campaign to convict Alphonse ‘Scarface’ Capone of tax evasion in 1931,” an article on the American Board of Forensic Accounting website notes.

Wilson and his team, part of the Treasury Department’s Special Intelligence Unit, spent the summer of 1930 in Chicago examining nearly 2 million financial documents and other pieces of evidence to try to make a case against the high-profile gangster. Known for controlling speakeasies, brothels, nightclubs and dog tracks, Capone also had police and politicians in his pocket.

Eventually, financial records from gambling establishments proved to be what the team needed to take Capone down – but not without weeks of navigating a complex paper trail that involved gambling ledgers, handwriting samples and banking deposit slips.

In early 1931, a grand jury indicted Capone on 23 counts of evading taxes – more than $250,000 total – on unreported income between 1924 and 1929. Capone went to trial that October and was convicted – much to his surprise, because he had rigged the jury, prompting the judge to bring in a replacement group from a courtroom down the hall. Capone was sentenced to 11 years in prison as well as $250,000 in fines and $30,000 in court costs.

Most forensic accounting cases aren’t quite so dramatic, though some do find their way into the spotlight. For instance:

Forensic accounting is complex, detail-oriented work that combines high-level professional accounting competency with a touch of Sherlock Holmes. Zeroing in on a rewarding career in the field starts with earning a master’s in accountancy.

The University of North Dakota’s Online Master of Accountancy Program

The University of North Dakota’s Master of Accountancy (M.Acc.) online program helps students master accounting principles and the skills necessary for success in the highest levels of the field.

UND’s Nistler College of Business & Public Administration is accredited by the Association to Advance Collegiate Schools of Business International, which recognizes only about 30% of business programs in the United States. The master’s in accountancy online program offers Practitioner and Fundamentals tracks tailored to different undergraduate backgrounds. Coursework is done online, which allows busy professionals to earn their degree while continuing their work and personal lives.

For more information, contact the University of North Dakota today.

How to Become an Auditor: Pursuing a Key Career in Accounting

Learn more about our accounting program.
Get Program Details