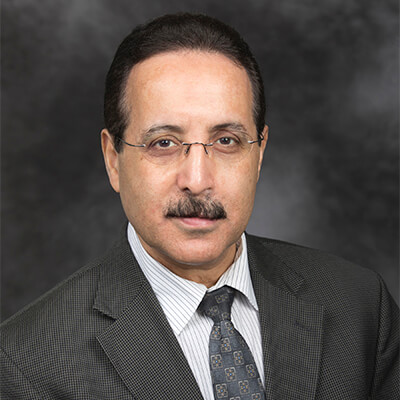 Dr. Hossein Salehfar received his Bachelor of Science (B.S.) degree in electrical engineering from the University of Texas at Austin, and his Master of Science (M.S.) and Doctorate (Ph.D.) degrees both in electrical engineering from the Texas A&M University in College Station, Texas. He was a research assistant with the Electric Power Institute at Texas A&M University during 1985-1990. He was an Assistant Professor of Electrical Engineering at Clarkson University in New York during 1990-1995. Since 1995 he has been with the Department of Electrical Engineering at University of North Dakota, Grand Forks, where he is now a full Professor.

Dr. Salehfar served as the Interim Chair of the UND Department of Electrical Engineering from 2010 to 2012 and as the Director of Engineering Ph.D. Programs for several years. Dr. Salehfar worked as a consultant for the New York Power Pool in New York and electric utilities and coal industries in the State of North Dakota. Dr. Salehfar has had active and externally funded multidisciplinary research projects funded by various government and private organizations. He has worked on a number of projects funded by the National Science Foundation (NSF), and the U.S. Department of Energy (DOE). Some of the projects that he has worked on include microgrids, alternative and renewable energy systems, fuel cell technologies, power electronics, electric drives and electric vehicles, wireless power transmission, neuro-fuzzy intelligent systems, smart grid and conventional electric power and energy systems, power systems reliability, engineering systems reliability and security, power systems production costing, energy and load management programs, and energy efficiency. He has supervised several Ph.D. and master’s level graduate students and has published his research work extensively in various national and international journals, conferences, and books.